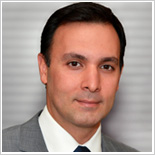 Dr. Ebby Elahi is a Clinical Professor of Ophthalmology, Otolaryngology, and Public Health at the Icahn School of Medicine at Mount Sinai. He also serves as Director of Fifth Avenue Associates and FACES Fifth Avenue. An internationally recognized expert in ophthalmic and oculofacial aesthetic and reconstructive surgery, Dr. Elahi is a fellow of the American Academy of Ophthalmology, the American Society of Ophthalmic Plastic and Reconstructive Surgery, and the American College of Surgeons. He is the current president of the Mount Sinai Eye Alumni Association and the immediate past president of the New York Facial Plastic Surgery Society.

After initially beginning his medical education at Louis Pasteur University in France, Dr. Elahi relocated to New York where he completed his undergraduate studies and obtained his medical degree from the Mount Sinai School of Medicine. He then completed his specialty and subspecialty training in Ophthalmology and Oculofacial surgery at Mount Sinai. For several years, he served as Director of Eye Care Services at Mount Sinai Medical Center prior to assuming the helm at Fifth Avenue Associates and FACES Fifth Avenue. Dr. Elahi has also served as co-director of Mount Sinai’s Ophthalmic, Plastic, and Reconstructive Surgery Fellowship program. Dr. Elahi also holds an MBA from Columbia University.

Alongside his clinical practice, Dr. Elahi is actively involved in research and education, frequently lecturing nationally and abroad. He is widely published in peer-reviewed and medical journals and has contributed to several internationally-referenced textbooks. Dr. Elahi’s innovative approach to orbital repair and enhancement has resulted in several U.S. patents. An inducted member of the Alpha Omega Alpha Medical Honor Society, Dr. Elahi is also the recipient of several prestigious teaching awards, including Mount Sinai’s Abraham Kornzweig Award for Excellence in Resident Education and Mount Sinai’s Auxiliary Board’s Award for Outstanding Contribution to the International Community.

For the past twenty years, Dr. Elahi has been an advocate for issues surrounding global health. Currently, he serves as Director of International Affairs at the Virtue Foundation, an NGO in special consultative status to the Economic and Social Council at the United Nations. In this capacity, he has organized and led multiple missions to various countries around the world, including Mongolia, Liberia, Burundi, Cambodia, Tonga, El Salvador, and Ghana, providing surgical care and training while seeking to improve the delivery of local healthcare. For the past several years, Dr. Elahi has led an academic consortium of data scientists to leverage data analytics with the goal of directing care to resource-poor regions around the globe.

Dr. Elahi has been featured in various media including The New York Times, ABC, CBS, and NY1. For many years he has been recognized by his peers through such publications as New York Magazine’s Best Doctors, Castle Connolly’s Best Doctors and Super Doctors. In addition to his practice which includes an advanced AAAASF-certified operating facility, Dr. Elahi also holds surgical privileges at Mount Sinai Medical Center, the New York Eye and Ear Infirmary, and Mount Sinai West.


•    Expandable Orbital Wall Implant – Patent US 2016/0039085
Invention related to an expandable implant to repair orbital wall or floor fractures using a minimally invasive incision to insert the device within the orbit.

•    Collar support member with fastening means, Patent US 2005/0251892
The invention relates to a device for supporting and retaining the shape of a collar of a garment.

The doctors and staff of Fifth Avenue Associates look forward to caring for you.

Your gift can help Virtue Foundation tackle critical issues and make a positive impact around the globe.